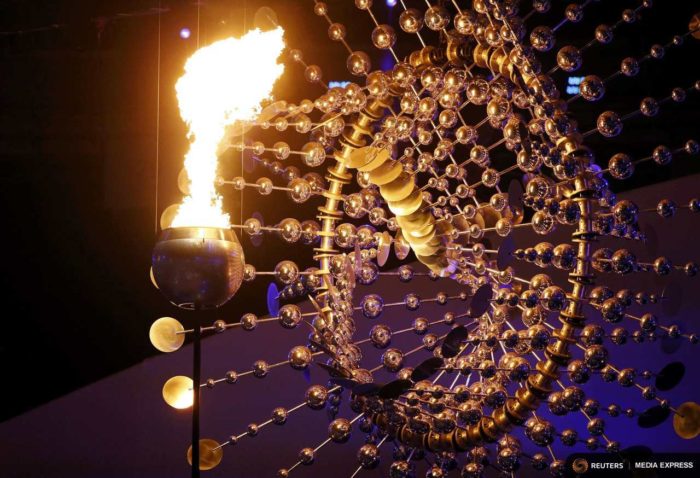 Anthony Howe, who has called the island home since 1994, designed the kinetic wind sculpture framing the Olympic cauldron in Rio’s Maracaña Stadium. Seventy eight thousand people attended the ceremony and some estimates put worldwide viewership in the billions.

In an opening ceremony that generated widespread acclaim – in contrast to the social and political turmoil surrounding the Rio Games – art critic Sarah Cascone said Howe’s piece “stole the show,” trumping even supermodel Gisele Bündchen on her last catwalk strut.

The two-ton metal and glass artwork is a variation on his piece “Lucea,” whose steel base was cast in Walla Walla. At the ceremony, the sculpture appeared to envelop the cauldron like a vortex from its suspended position in midair, where it gently pulsed in the breeze.

Following a budget-conscious but visually stunning ceremony that retold Brazil’s history (warts and all, including explicit references to slavery) Howe’s artwork capped off the night when Brazilian marathoner Vanderlei Cordeiro de Lima lit the Olympic cauldron, the flames rising to meet the sculpture.

“My vision was to replicate the sun, using movement to mimic its pulsing energy and reflection of light,” Howe said in a press release before the ceremony. “I hope what people take away from the cauldron, the Opening Ceremonies, and the Rio Games themselves is that there are no limits to what a human being can accomplish.”
more on the Seattle Globalist >>
August 15, 2016
Chris Minney
Comments Off on Orcas Island artist front and center for Olympics opening
Blog
art   galleries   orcas island
Getting to the San Juans | Live San Juan Islands Cams | Wildlife in the Islands | Salmon Basics | History of the Islands | Shop Online | Reservations | Contact